Sometimes it takes time to make a data visualization, and sometimes they just fall out of the data practically by accident. Probably the most viewed thing I’ve ever made, of shipping lines as spaghetti strings, is one of the latter. I’m working to build one of the former for my talk at the American Historical Association out of the Newberry Library’s remarkable Atlas of Historical County Boundaries. But my second ggplot with the set, which I originally did just to make sure the shapefiles were working, was actually interesting. So I thought I’d post it. Here’s the graphic: then the explanation. Click to enlarge. 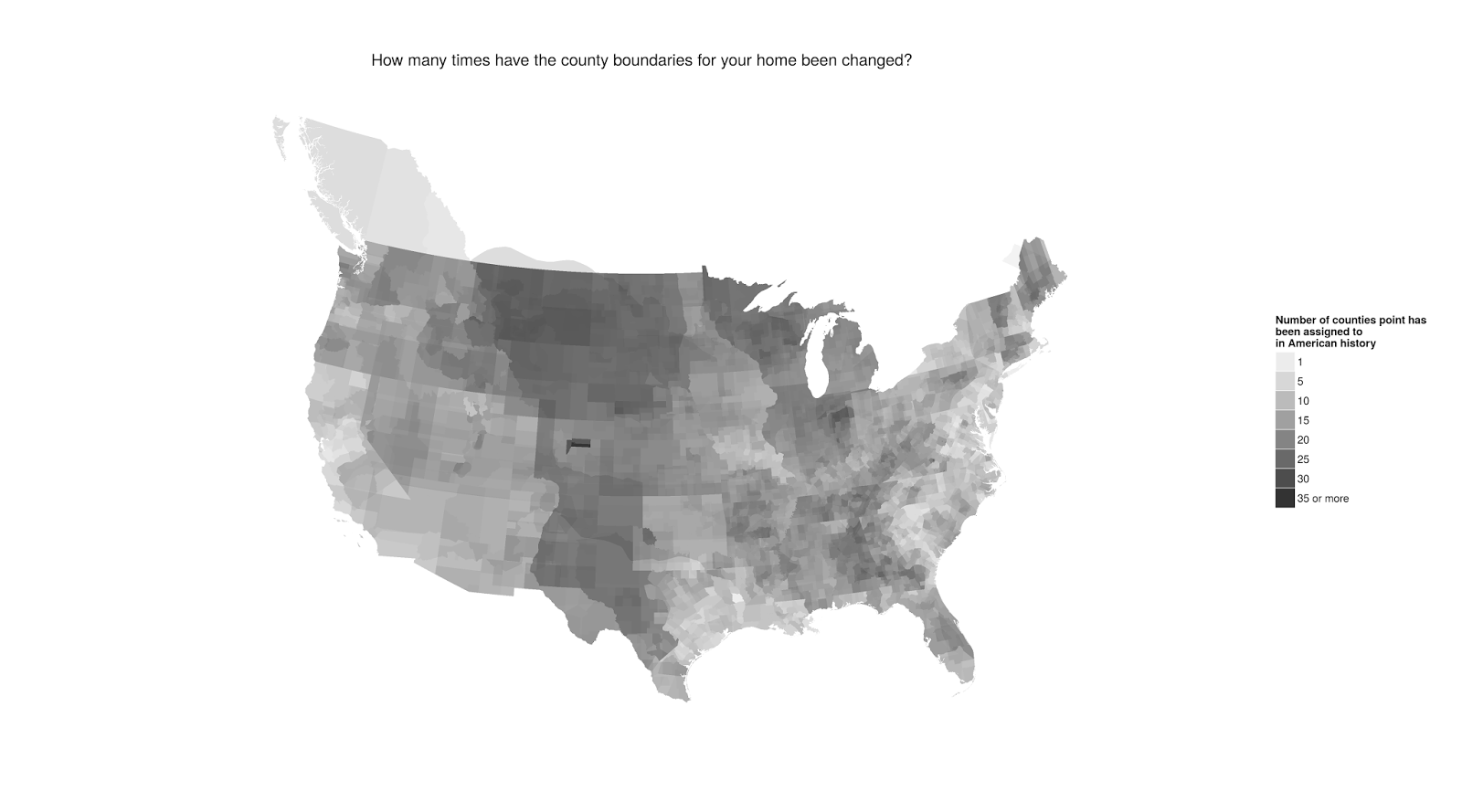 Since there’s a separate shape for every re-legislation of a county’s borders, plotting each one with fixed alpha means that the dark areas are those in places where county lines have been drawn and redrawn.

Some interesting patterns emerge. The least re-drawn areas tend to be the Piedmont counties, I think, in the South, which is not especially unexpected; but also New Hampshire, Missouri between the Mississippi and Missouri, and the area southeast of San Francisco Bay.

The most tinkered with are central Indiana, going back to various contested claims in the colonial period; the area around Denver; and most of Montana, which was first claimed in 1803 but wasn’t subtantially settled and organized for decades. The imprint of the Texas Annexation and the Louisiana purchases are quite clear; the relatively sparse reorganization of Oklahoma dates back to its period as relatively undisturbed Indian territory;

There are also a number of interesting local features, including: the disputed Ohio-Michigan border that led to the Toledo War; several of the independent towns of Virginia; the impressively undisturbed old counties of the lower Hudson; and a very clear outline of the Mississippi.

Nothing profound here, but it’s kind of interesting.

You can see a larger version at http://imgur.com/NrVkSdR

What’s the story behind British Columbia’s…

There was this whole thing in American history whe…

There was this whole thing in American history where we disputed the ownership of British Columbia with the Brits. At one point it was probably officially counted as part of the country, and in this case, it’s own county. Note the areas stretching over the 49th parallel at other parts of the Canadian border. Same concept.

Counties are not very important in New Hampshire -…

Counties are not very important in New Hampshire - they have relatively little governmental function and no land of their own (all towns/cities spread out to touch all their neighboring towns and cities). This may explain the Granite State’s lack of changes; counties just don’t matter much.