Gender and the long-term decline in humanities enrollments

A quick addendum to my post on long-term enrollment trends in the humanities. (This topic seems to have legs, and I have lots more numbers sitting around I find useful, but they’ve got to wait for now).

David Brooks claimed in the Times, responding to the American Academy’s report on the humanities and social sciences, that the humanities “commited suicide” by focusing on “class, race and gender” instead of appealing to “the earnest 19-year-old with lofty dreams of self-understanding and moral greatness.” There’s a lot wrong with this argument. Most of it is obvious from information already on the Internet. (David Silbey notes some of it vis-a-vis my last stats here.)

The most ironic part, though, is that hard-to-find data about the structural role of gender in university enrollments makes nonsense of Brooks’ narrative that the humanities were undone by studying gender. Government bureaucrats have always been careful, though, to segregate degrees by gender in their reports.* Those are the reports I typed up to get the trend lines back to 1948 for my last post.
*I don’t want to put off any earnest 19-year-olds out there: but one might argue that a persistent state interest in segregating educational achievement by gender suggests a certain degree of, shall we say, purposeful reproduction of sexual difference as a category of exclusion by the state.

If Brooks is right, one would expect a general decline in enrollments since the 1950s. But the long term results actually show that since 1950, only women have shown a major drop in the percentage of humanities majors. (And keep in mind that the college population has increased dramatically in this period: this is just about college students). Men are just as likely (7%) to major in the humanities as they were in 1950, although there was a large spike in the 1960s. 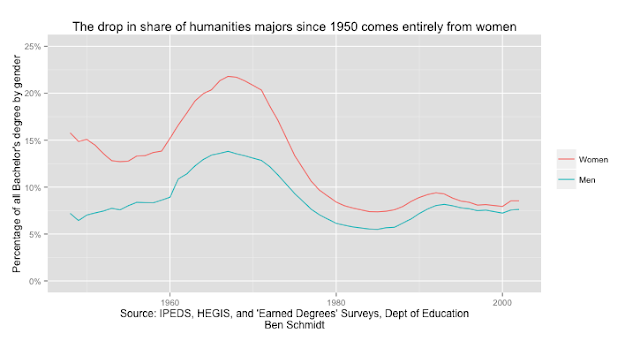 All the caveats from before apply: the humanities are not a stable category, I’m only including the top four majors (which are increasingly less dominant over time), the overall number of degrees has increased dramatically, and so forth. On net, I think those corrections actually suggest the pattern from 1948 to 2002 is largely of ascent (while 2002-2011 is mostly stable).

There are lots of explanations that might work for this: one could start with changing workplace educations for women, although I’d be reluctant to even start to do that without knowing the long-term trends for normal schools. It might be about the opening of other majors to women.

But: any explanation of long-term trends that requires a net drop in male humanities enrollments doesn’t fit the data. And any explanation that would apply more to men than to women (like Brooks’ claim that undergrads are just as bored with gender studies as he is) is clearly nonsense.

Cast Brooks’ mistake as you like: as a structural account of the inability of the American punditry’s inability to imagine a statistical subject who doesn’t precisely resemble themselves, in gender above all; or as a single man whose ability to think clearly was undone by his unwillingness to confront his own prejudices.

But the point is, explanations of the decline in humanities majors have to reckon with changing gender patterns in the American university.

Thanks for adding this data to the story. Anecdota…

Thanks for adding this data to the story. Anecdotally, this totally jibes with my experience teaching history at a big public university, where my students are predominantly male.

I can’t tell from the above, but have you factored in the shift in the sex ratios of the American student body over the same period covered by the graph? At the same time that the absolute number of college students has increased, the proportion of that number that is women has increased dramatically, as well. Depending on how the figures run, a drop in the percentage of that increasing number of female students earning BAs in humanities fields could mean different things for the humanities in general.

No, that’s a good point: the college populatio…

No, that’s a good point: the college population has gotten more female, which would have been good news for the humanities at the start of period. But at this point, women and men are basically the same in their choice of majors. Another way to think about the data (I’d have to run it to be sure) might be that all the new women entering college, essentially, majored in non-humanities subjects (at least after 1970).