I wanted to try to replicate and slightly expand Ted Underwood’s recent discussion of genre formation over time using the Bookworm dataset of Open Library books. I couldn’t, quite, but I want to just post the results and code up here for those who have been following that discussion. Warning: this is a rather dry post.

The result, from the Bookworm dataset, doesn’t show trends as clear as Ted’s, but some interesting evidence remains. To track genre formation (or really, genre persistence) I compared each of 5 Library of Congress subject headings to each other. This is using the same metric of similarity as Ted’s post (Spearman correlation of the top 5,000 words) with one exception (see point 2 below). I also took two separate sample from each genre in each year, so I can look at how similar biography is to itself without any overlap. 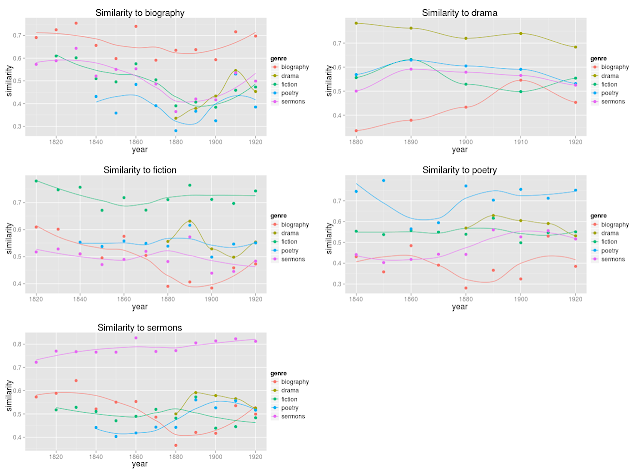 Similarity to fiction is the chart that Ted looked at the most, and my findings are roughly consistent with his, except that I lack the 18th century, and therefore don’t show the pronounced decline he does. That makes my results less interesting: but it also confirms he’s looking in the right place for action on these particular areas. I should be doing this inside the social sciences, probably, if I want to capture genres in action: maybe next month sometime.

Nonetheless, this also isn’t as smooth as Ted’s charts, for a few reasons I want to address.

1. (And this is really the only substantive comment I have). I very deliberately tried to avoid any smoothing before the final step. Taking 39-year slices (or one year slices) and comparing them to other 39-year slices, or even to 1-year slices, as Ted does, means there will be substantial overlap between adjacent points, and so the data will look smoother than it actually is.  So m goal was to create subsets of books that are about 1,000,000 words, that can be directly compared to each other in the same time horizon, and that have zero overlap from one to the next. The best way to do that seemed to be about a decade at a time. The code to do this (below) is pretty hairy; it’s possible that it introduces some errors. (I notice, off the top, that I actually use an 11 year interval and a ten-year time step, so there may occasionally be a book that ends up representing poetry twice. These will be very rare, though, and poetry compared to poetry will never have overlapping elements. I hope).

2. I use word stems, instead of words, as my comparison; that loses tense differences between words, which helps differentiate between genres, but which don’t generally capture the differences I’m interested in.

3. My LC Subject Headings may not capture genres the same way his categories do.

4. Bookworm data includes books published in a year that were written earlier. (Drama, most notably, includes Shakespeare). That will haze up trends in general, though not eliminate them.

Here’s the size of the results I’m using, number of books and average number of words:

And here’s my R code to make these charts, just pasted inline. I’m posting this mostly because it was fun to try to comment up a longish piece of code that never uses ‘if’,‘for’, a variable named ‘i’, or any of the other elements of normal programming that R eschews. This unfortunately probably makes it nearly unreadable as well, since the primary action is descending up and down a complex data structure that is pieced together in various places. And this is another irreproducible result, because you need a local version of Bookworm to run it. But: here you go!

#This uses the API to Bookworm to build a data.frame with metadata for all the books matching
#the query. The list structure is so ugly because the API uses dictionary structures
#extensively, and R is one of the less JSON-friendly languages out there.
#This Bookworm API lets all sorts of fun questions get asked; the reason we don’t expose it,
#oddly, is because it’s too powerful; it’s easy to accidentally submit a query that can hang the server
#for hours.

#I”m not showing all the code here: for instance, “Rbindings.R” is a
source(“Rbindings.R”)
con=dbConnect(MySQL())
booklist = dbGetQuery(con,
APIcall(
list(“method” = “counts_query”,
#Groups is the most important term here: it says that we want a data.frame with years, Library of
#Congress subject headings, and unique identifiers for all the books matching the search limits.
#We’ll also get the numbers of words in each book–that’s what counts_query does.
groups = list(‘year’,“LCSH as LCSubjectHeading”,‘catalog.bookid as id’),
“search_limits” = list(
LCSH=list(“Poetry”,“Fiction”,“Biography”,“Drama”,“Sermons”,“Sermons, English”,“Sermons, American”),
aLanguage=list(“eng”)
)
)
)
)

#As it turns out, the database results are a little buggy, so we have to clean them
#to make them work completely consistently. (This is MySQL’s fault, mostly)
booklistundefined

summary(booklist)
#Now that we know what the books are, we just set a couple variables:

#And here’s the beginning of the meat, where we decide which books we’ll be looking at.
#ddply is a beautiful function that iterates over the categories in a data frame to produce a list
#It’s part of Hadley Wickham’s ‘plyr’ package: the ‘dl’ at the beginning means
#‘dataframe’->‘list’, and there are lots of other ways to use it.
require(plyr)
booklist[1:5,]
samples = ddply(booklist,.(LCSubjectHeading),function(LCSHframe) {
#This goes by each of the subject headings, and creates a new frame only consisting
#of books with that heading. We’ll create the samples from those.
genreSamples = ldply(seq(1800,1922,by=smoothing*2),function(year) {
#Now we’re going to create some sample years. I just put them in by hand here.
myframe = LCSHframe[LCSHframeundefined

count))
#Then assign group numbers to individual books based on some random sampling.
group = unlist(lapply(1:100,function(n) rep(n,times = sample(corpusSizes,1))))
#Only a few of these are actually needed.
myframeundefined

count)))
#Then I just remove all but the top two sets, order by how close they are to our wordcount target.
counts=counts[order(abs(wordsPerSet-countsundefined

set))
list(corpus = corpus[,c(‘id’,‘set’)],distance=distance)
})
#OK, so we have 100 lists of book pairs of about 1,000,000 words. Let’s narrow it down.
#you can use “[[” as a function in an apply statement to pull out just one element
#of a list–this is frequently handy. Here I create two new vectors: one the number of
#in each of the booklists we’ve created, and one the actual books in that list.
corpusgoodness = sapply(possibleSamples,‘[[’,“distance”) #sapply returns a vector, not a list.
corpuses = lapply(possibleSamples,‘[[’,“corpus”) #lapply returns a list, which we need
#because there can be varying numbers of bookids in each group here.
#Some of these simulations produce corpuses with only 40 or 50K words; I take the
#two that are closest to 1,000,000 words in length. This will probably bias us towards
#shorter texts: I don’t know that that’s a problem, but it could be.
topSamples = corpuses[[which(corpusgoodness==min(corpusgoodness))[1]]]
topSamples$year = year

#if the mean distance is more than 10% of the whole, just scrap the whole thing.
if (min(corpusgoodness,na.rm=T)>wordsPerSet/10) {topSamples = data.frame()}
#We now add a column to the frame that lets us know what year the sample
#is for.
#And then we return the set back out. These will get aggregated across subject headings by ddply
#automatically
topSamples
},.progress = “text”)
})

#So now we have a data.frame with four columns: bookid,year,genre,and set.

#I’ll fill those in with the actual top 5K words for every comparison we’d like to make by doing a ddply call that fills in the words with actual
#examples from the database. Then we can take some summary statistics from them.`

words = ddply(samples,.(year),function(yearsample) { #Dividing by 'year' has ggplot create a frame for each year with a list of the books in each sample yearResults = ddply(yearsample,.(LCSubjectHeading),function(subjectSample) { #Then--and this is the most time-consuming step--we pull out the full word counts, again using #the Bookworm API, for every set of bookids in each year-subject heading-set combo ddply(subjectSample,.(set),function(myframe) { words = dbGetQuery( con, APIcall( list("method" = "counts_query", #This 'groups' term is where I specify what's getting returned. I like to use stems in #situations like this, so that differences in verb tenses don't affect the results. groups = list('words1.stem as w1'), "search_limits" = list( #This is where I place limitations on the words returned: myframe$bookid is a vector #that contains all the bookids in the 1,000,000 word sample we're looking at. #This as.list(as.integer()) stuff is ugly. catalog.bookid=as.list(as.integer(myframe$id)) #To test this out, I only count words that appear immediately before the word "are" #word2=list("are") )) ) ) #RMySQL tends to return character vectors, but factors are much more efficient. So we change it. words$w1 = factor(words$w1) words }) }) #Here's a random problem: I select on stems, but some words don't have stems in my database #(Arabic numerals, for instance). So we have to drop all those. yearResults=yearResults[!is.na(yearResults$w1),]

`
#And here’s where it gets a little ugly. We want to have a data.frame that has information on each
#of the combinations that we can look at. One line for fiction subset 1 compared to poetry subset 2,
#one for biography 2 to fiction 1, and so on down the chain. expand.grid does this in one function call.
variable_combinations = expand.grid(
genre=levels(samplesundefined

XXX--UNIMPLEMENTED PANDOC TYPE--Math [{"t":"InlineMath"},"count.x),]   #I'd actually like to just return this as it is, but that's impractical with sufficiently large sets.   #So we reduce it down to a single score--similarity--instead   ddply(topwords,.(genre,group1,comparedTo,group2),function(comparison){     comparison = comparison[!is.na(comparison"]XXX

XXX--UNIMPLEMENTED PANDOC TYPE--Math [{"t":"InlineMath"},"similarity),] head(similarities) #Earlier, we made it so that we didn't have both fiction-poetry and poetry-fiction #Now I add them back in, to make the plotting work in either direction: inverse = similarities names(inverse)[match(c(\"comparedTo\",\"group2\",\"genre\",\"group1\"),names(inverse))] = c(\"genre\",\"group1\",\"comparedTo\",\"group2\") #Basically, we just switch the names around, and rbind knows to keep them together similarities = rbind(similarities,inverse) #Using two sets gets two different samples. I want these to be as different as possible, so I only compare 1 to 1 and 2 to 2, except within a single genre. similarities = similarities[similarities"]XXX

#I’m going to make a bunch of plots at once using lapply here:for each of the types of genres.
plots = lapply(levels(summarysimsundefined

#The 1800 data is terrible, so I’m just dropping it. Partly this may be labeling by libraries of 18xx as 1800, it may be
#may be typesetting mistakes.
plots2 = lapply(levels(summarysimsundefined

Thanks, Ben. The results are interesting, and I…

Thanks, Ben. The results are interesting, and I’m also going to enjoy going over this R code. I think I’m going to try to produce a revised version of some visualizations that incorporates some of the ideas here - plotting self-similarity for the genre, for instance, instead of a flat line at the top.

The thing that I really wanted to do–but didn’…

The thing that I really wanted to do–but didn’t, because my trend lines weren’t nice–was use geom_path so that the x axis could be distance from fiction, the y axis distance for poetry, and ordinal values of the paths would show how a genre moved in that space over time.

But my results are too messy for that to work. It might for you, though.