What are the most distinctive words in the nineteenth century? That’s an impossible question, of course. But as I started to say in my first post about bookcounts, [link] we can find something useful–the words that are most concentrated in specific texts. Some words appear at about the same rate in all books, while some are more highly concentrated in particular books. And historically, the words that are more highly concentrated may be more specific in their meanings–at the very least, they might help us to analyze genre or other forms of contextual distribution.

Because of computing power limitations, I can’t use all of my 200,000 words to analyze genre–I need to pick a subset that will do most of the heavy lifting. I’m doing this by finding outliers on the curve of words against books. First, I’ll show you that curve again. This time, I’ve made both axes logarithmic, which makes it easier to fit a curve. And the box shows the subset I’m going to zoom in on for classification–dropping a) the hundred most common words, and b) any words that appear in less than 5% of all books. The first are too common to be of great use (and confuse my curve fitting), and the second are so rare I’d need too many of them to make for useful categorization. 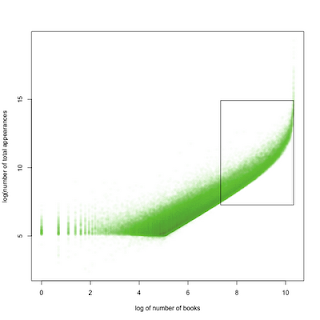 (more after the break) 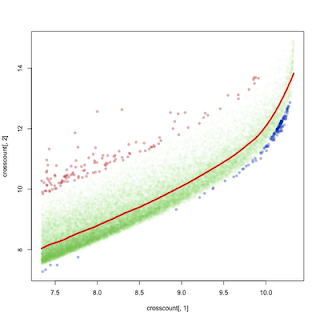 Just at you’d think, there’s a lot more variation on the side of lumpiness than of smoothness. We’re only going to look at the lumpy words from now. Let’s zoom in further so we can see the individual words. 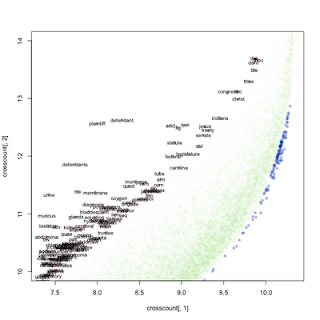 Not bad. It’s a good sign when words as closely related as ‘plaintiff’ and ‘defendant’ appear right next to each other. You can also books using archaic pronouns, latin, religious language, and a variety of scientific and medical terms. Plus some colloquialisms–any work with a lot of “ain’ts” is probably a popular novel, though the reverse isn’t true “you” and “dont” fall into this category as well.

What are the top 20 lumpily-distributed words, you ask?

Looking at this again, I realize “fig.” …

Looking at this again, I realize “fig.” is a figure in a book with illustrations. I’m embarrassed it took me so long to figure that out.