[Update: I’ve consolidated all of my TV anachronisms posts at a different blog, Prochronism, and new ones on Mad Men, Deadwood, Downton Abbey, and the rest are going there.]

I’ve got an article up today on the Atlantic’s web site about how Mad Men stacks up against historical language usage. So if you’re reading this blog, go read that.

Maybe I’ll add some breakouts of individual episodes later today if I get some time, but here are the overall word clouds like the ones I made for Downton Abbey. Mad Men has noticeably fewer outliers towards the top: 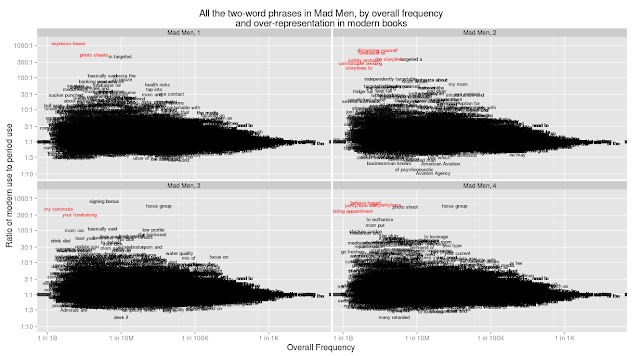 And the ones that are are actually appropriate. (My dissertation actually has a bit on the origins of focus groups in the 1940s).

What’s the deal with all the ones with “m…

What’s the deal with all the ones with “mom” in them? Did people just used to say mother? Like you insist on saying father?

I don’t really know about that one. Maybe ther…

I don’t really know about that one. Maybe there used to be a lot of variety–‘mother’,‘ma’,‘mommy’,‘mum’ that has been flattened out in favor of just “mom”? But yeah, there may also have been a shift towards usage of ‘mom’ in situations when mom’s not around; as you say, o anonymous commenter, I’ve always thought it sounded wrong to say ‘my dad said’ rather than ‘my father said’, in much the same way I wouldn’t call a professor by his first name in front of an undergraduate–they don’t have the relationship for the term to be appropriate.

How long did it take for you to make this?

How long did it take for you to make this?

Did you try spelling “fundraising” as &q…

Did you try spelling “fundraising” as “fund raising” or (as my Webster’s 11th has it) “fund-raising”? I get the impression that the closed-up spelling is itself a more contemporary practice.

Since I already had the chart code made up for Dow…

Since I already had the chart code made up for Downton Abbey, it was just running a different set of data through, which was easy. It takes the computer approximately one cup of coffee’s worth of time to run all the queries and find the outliers, though.

Yes, fund raising is considerably older than fundraising–that’s why I didn’t talk about it in the Atlantic article. A lot of the time ‘mistakes’ are just spelling changes that sound exactly the same. I also dropped out a bunch of words like ‘any one’/‘anyone’ , ‘some one’/‘someone’, as well as words like ‘gonna’ for the same reason.

This sort of chart can only be a first pass for figuring out where things go wrong.

Could you do your analysis on a novel or two, say …

Could you do your analysis on a novel or two, say Mason & Dixon and The Sot-weed Factor, both using language of the 18th century, though, at least in Mason & Dixon, with some intentional anachronisms?

Unfortunately full texts of recent novels are impossible to get because of copyright. (Well, probably not impossible, but I don’t feel like flirting with that line).

What I really do want to do at some point is write up a little more some analysis I did of Edith Wharton’s Age of Innocence; it’s about as close a twin to Mad Men as you could get (set in upper society echelons of New York city about 45 years before, a detached commentary on changing social mores), just written in 1920 instead of 2007. And I think (will have to re-check) that the story is that Weiner is much better than Wharton.

I CANT EVEN TELL WHAT IT SAYS

I CANT EVEN TELL WHAT IT SAYS

what does it sat

what does it sat

While my husband was watching last night, two othe…

While my husband was watching last night, two other anachronisms jumped out at me. The name “Megan” does not even appear on American name frequency charts until the early 1950’s–much too late for someone of that name to have been in the work force of Don Draper’s day. The other has to do not with language, but with the social norms, of the early to mid 1960’s. The only adults that I can recall having had birthday celebrations were those who had reached seventy-five or more. The first large birthday parties for adults that I remember began in the early 1970’s when the “never trust anyone over thirty” crowd of the late ’60’s began to reach that milestone. Before that, birthdays after high school but before “old age” were usually celebrated only with one’s family or perhaps at a dinner out with a very few close friends.

I heard Cooper use the phrase “out of the loo…

I heard Cooper use the phrase “out of the loop” which didn’t appear until the Reagan administration.