Note: this post is part III of my series on whaling logs and digital history. For the full overview, click here.

The main thrust of my big post on the Maury logs is against using them to try to tell individual stories. But in the interests of Internet Melvilleiana, there are two particular tracks I want to pull out.

The first is the Acushnet, the whaling ship Herman Melville served on for 18 months. It was there he got the bulk of his first-hand experience whaling. Melville’s track winds mostly around the old American whaling grounds off the coast of South America: you can see that had he stayed aboard a bit longer, the chase for Moby Dick might have entered colder waters. (And we might have a 19th-century account of Aleutian islands as strange as the Encantadas are of the Galapagos).

Melville’s voyage seems to start somewhere near Buenos Aires: but by matching the dates Melville was on the Acushnet against the days that we have logbook data for that ship, it’s possible to confirm that there are no other significant chunks of his voyage missing. 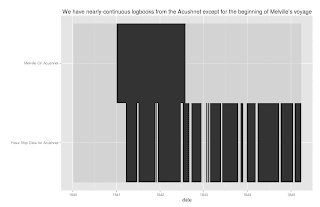 I was pleased but not surprised to see the Acushnet in the data: but I was amazed to see that we also have some logs from the Essex, the whaling ship overturned by its prey in 1820, on which Melville based the sinking of the Pequod. We don’t have the last voyage, of course: the early voyages we do have were from before the Essex was turned into a whaler. But there are nonetheless about 3 years of voyages from the Essex’s first incarnation as a China trader. I should say I’m not sure that this is Melville’s Essex: there’s another Essex track in the logs from 1797, before the China trader/whaleship was built. But the facts behind this track seem to line up pretty well here with what we know of the to-be-whaler, and in any case it’s going on the same kind of journey.

For this one, the context I’ll give is all of the Maury collection’s pre-1815 voyages. The track is missing the actual arrival in Canton, but gives a generally clean route through Europe and the Indian ocean, up past Batavia into the South China Sea and back again. (I’m not sure what that funny loop in the Indian ocean is doing–any ideas?)