Vector Space, overlapping genres, and the world beyond keyword search

I wanted to see how well the vector space model of documents I’ve been using for PCA works at classifying individual books. [Note at the outset: this post swings back from the technical stuff about halfway through, if you’re sick of the charts.] While at the genre level the separation looks pretty nice, some of my earlier experiments with PCA, as well as some of what I read in the Stanford Literature Lab’s Pamphlet One, made me suspect individual books would be sloppier. There are a couple different ways to ask this question. One is to just drop the books as individual points on top of the separated genres, so we can see how they fit into the established space. By the first two principal components, for example, we can make all the books  in LCC subclasses “BF” (psychology) blue, and use red for “QE” (Geology), overlaying them on a chart of the first two principal components like I’ve been using for the last two posts: 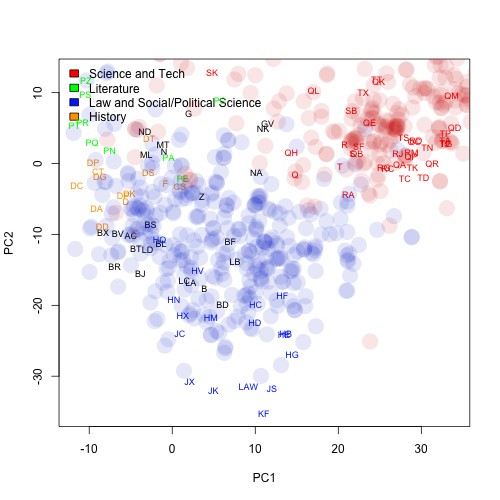 That’s a little worse than I was hoping. Generally the books stay close to their term, but there is a lot of variation, and even a little bit of overlap. Can we do better? And what would that mean?

First, let’s review why we care about this at all. Categorizing and assigning texts is a big and vibrant field in information retrieval, and one that’s starting to work around the temporal dimension. (Allen Riddell points to some good related sources, including digital history, in the comments). Humanists playing around with R aren’t going to make substantive contributions to those algorithms, I’m afraid. What we can do, though, is see how the existing categorization algorithms might help a) provide insight into the categorizations we work with now, and b) help us find connections or documents that you can’t simply search for. I’m not interested in tightening those circles for its own sake–I just want to see how we might use this data to learn things about books we have. There’s thus some fairly low-hanging fruit (for example, what are the least coherent genres under the LC classification?) that I’ll let be.

For this post, therefore, I’m just going to use a pretty simple form of categorization–Euclidean distance across the 10,000 words I’m using this week, using standard deviations from the mean term frequency for the word as the base metric. There are more subtle ways to do this–I’m not using the principal components, for example, that tell me which lexical information is a good predictor of genre (“hypothesis” vs. “premonition”, say), and which isn’t (“Williams” vs. “Smith”, which can swing around wildly from book to book). But this should work as a first pass.

The vector space model lets us see which books a given book is closest to. Those blue dots above are only showing us closeness in two dimensions: if we include all the information that exists in the other 9,998 dimensions that using 10,000 words gets us, we can find the closest genres for the 350 psychology books in my main database as follows:

That is to say, about 2/3 are closer to BF than they are to any other genre. That’s a lot better than the above diagram would indicate. The most common errors are to think a work is in AC (serials); the philosophy/religion classes BJ, BL, and BD; and LB, practice of education. Some of the mistakes aren’t terrible: education and psychology are very hard to tell apart in this period, for example. And the oddballs are explicable, too. A lot of them seem to be because spiritualism is classed in with psychology. (I could just filter out everything will a call number above 1000 to get rid of them). Spiritualist tracts, depending on their bent, pop up as English history, in various religion classes, and elsewhere. I might well get better results in analyzing psychology by using a filter to eliminate texts closest to PZ, novels:

The other mistakes are more or less explicable, too. The book mistaken for E (US history) is The study of greatness in men; the one mistaken for PE, English language, is What handwriting indicates. There’s a definite method to the madness. We’d certainly want to have a better algorithm overall, but the LCC classification limits our options. Forget a computer program–no humans not already familiar with the system would be able to determine just what goes into each subclass based purely on its name.

And anyway, as I said, our interest probably isn’t in classifying: it’s in finding interesting things for ourselves. So we can, for instance, find the 5 books in psychology that fit in the least well with the category:

Some of these we saw before. Others are just strange–I had no idea that BF 1745-1779 was for “Oracles, Sibyls, and Divinations.” Still, a lot of these books are just the kooks and quacks that anyone who’s spent much time in the GAPE sees constantly.

What about the converse? We can see what books most perfectly mirror the overall language of the discipline by finding ones with the smallest distance:

Why do those all look the same? The five most representative books of the BF class are five separate editions/volumes/revisions of William James’s Principles of Psychology. That’s rather nice. It might be a bit much to try to test to see if he’s so perfect because he followed the field faithfully or because that text actually set the course of research, but there’s something comforting about seeing we all read the book for the right reasons. (Joseph LeConte’s textbook occupies the analogous place in geology, FTR).

More usefully, we can find books that match a given genre: the five psychology books, say, that most closely resemble the education class:

27473     The principles of psychology  principlespsych12jamegoog

Or the five novels written in 1912 that share the profile of HN, Social Reform and Social movements:

This is starting to get interesting. John Rawn, for example, carries a dedication to Woodrow Wilson, “one of the leaders in the third war of independence” and led to a times article in which he defended himself against charges of socialism; King John of Jingalo is a novel of court life; etc. White Ashes is about “the romance of fire insurance:” a review that says “Big business interests enter into the plot; and while characters subordinate to theme, there is sufficient love interest to relieve the strain of insurance talk and transactions.” These are good ways of turning up cultural ephemera that are typical of longer-term trends but might have been lost in the meantime.

If Ted Underwood is right that search is the killer app of text mining, there’s still an enormous amount of work that could be done to allow topical, rather than keyword, search. Historians love to and need to find books that cross the same boundaries as their unique research topics. At least at Princeton, that seems to be happening more and more. (Probably because of Google Books, in part). This doesn’t need to be limited to genre, incidentally–we could find the book published in Pittsburgh that most resembles books using “evolution” and “society” a lot, or list the books of Henry James by how closely they mirror his brother’s overall style. If this were easy to do, historians would find it an incredibly useful tool for filling in gaps in their research. Keyword search is only one kind of search, but it’s the only one the vast majority of historians have access to.

So why can’t you go on Amazon or Google and do these searches? Two basic reasons, I think:

I want to do one more post of math before I get political again, but briefly: the fundamental problem is that while historians recognize the social construction of technology in historical actors, they are largely missing the opportunity to shape the wave of technological change that’s sweeping across the discipline. The new wave of digitization has been coming online for a few years, but it looks on the surface quite a bit like the resources we got in the 1990s. (Except that now it comes with ‘visualizations’, which I’m as guilty—fine, more guilty—of fetishizing than anymore else.) It would be tricky, but there’s still some room for a different attitude towards how digital libraries can have something better than digital card catalogs. I’m worried, though, that some of our leading figures aren’t necessarily embracing all the possibilities to make them better.

Speaking as a literary historian, I can immediatel…

Speaking as a literary historian, I can immediately see the utility of a tool that would let me find “the novels that most closely echo discourse X in period Y.” That would be extremely valuable.

I’m trying to build something similar, although I’m conceiving it as a tool that finds volumes that echo a trend (i.e., are early outliers in it), rather than echoing a synchronically-defined discourse. But for most purposes I think the discourse-matching concept will be more useful, and its uses will also be easier for scholars to grasp.

” It would be tricky, but there’s still s…

” It would be tricky, but there’s still some room for a different attitude towards how digital libraries can have something better than digital card catalogs.”

Great work Ben. I’ve been working on similar techniques for journalism at the Associated Press, where we get huge document dumps pretty much weekly. I’ve been using multi-dimensional scaling instead of PCA, because it can better represent the clustering structure than simply throwing out the rest of the dimensional data. But it’s still based on TF-IDF document vectors so the principle is the same. I’ve even found pre-existing categories to plot against the layout. So I think you’ll definitely be interested in my talk at the computer-assisted reporting conference in Raleigh last week.

“Digital humanities” and “computational journalism” have a lot of common ground, and I’m happy to see someone thinking similarly in another field.

Jonathan, Thanks for the link–I read about

Thanks for the link–I read about overview a while ago, and it would definitely have applications for historians looking at massive archival sources as well (once we figure out how to get them digitized, of course…) Really exciting stuff.

Yeah, it definitely turns out it’s necessary to use all the vector-space data, not just the principal components. It’s not bad, though, once you do. For visualizing, I take it you’re using some type of force-directed placement algorithm to arrange the documents in 2-D? That seems like the right way to go for visualization; it works much better when I’ve tried it.