Women in the libraries

It’s pretty obvious that one of the many problems in studying history by relying on the print record is that writers of books are disproportionately male.

Data can give some structure to this view. Not in the complicated, archival-silences filling way–that’s important, but hard–but just in the most basic sense. How many women were writing books? Do projects on big digital archives only answer, as Katherine Harris asks, “how do men write?” Where were gender barriers strongest, and where weakest? Once we know these sorts of things, it’s easy to do what historians do: read against the grain of archives. It doesn’t matter if they’re digital or not.

One of the nice things about having author gender in Bookworm is that it opens a new way to give rough answers to these questions. Gendered patterns of authorship vary according to social spaces, according to time, according to geography: a lot of the time, the most interesting distinctions are comparative, not absolute. Anecdotal data is a terrible way to understand comparative levels of exclusion; being able to see rates across different types of books adds a lot to the picture.

In this post, I’m going to run through a lot of basic metadata about the gender composition of libraries very quickly, because I need to know it to work with this data. Although this is the bookworm database, the rules for inclusion in Bookworm are so simple (Open Library page, Internet Archive downloadable file) that at least up to 1922, the results here should be broadly similar to any large selection of texts that draws heavily from the Google library-scanning project. (Most notably: HathiTrust and Google Books). And those are so similar to the composition of the university libraries that humanists have been using for decades, that even non-digital researchers should have some use for similar statistics.

More interesting findings might come out of more complicated questions about interrelations among all these patterns: lots of questions are relatively easy to answer with the data at hand. (If you want to download it, it’s temporarily here. For entertainment purposes only, etc., etc.)

The most basic question is: what percentage of books are by women? How did that change? (Of course, we could flip this and ask it about men–this data analysis is going to be clearer if we treat women as the exceptional group). Here’s a basic estimate: as the chart says, post-1922 results are unreliable. The takeaway: something like 5% at midcentury, up to about 15% by the 1920s. 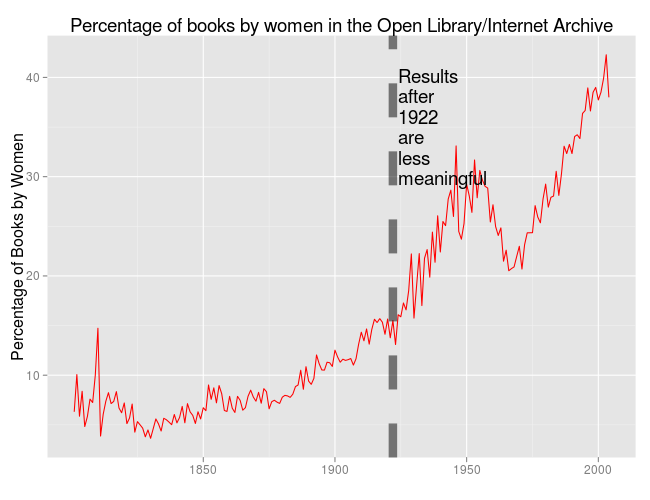 Although the fall around 1950 is hard to interpret since the sample gets so small and specific, I do think it’s interesting: I think, without references that a lot of other indicators of women’s empowerment (Ph.D. and BA earning rates? age at first marriage?) show a similar pattern when plotted against time. Just another reminder that the 1960s are one of the least typical periods in US history, and that the widespread practice of using them as some sort of baseline is very misguided.

From now on, I’m removing post-1922 data from the analysis.

Next: Library of Congress classifications, my favorite proxy for genre. The labels won’t fit on this chart, but you can read them here. The results are generally between 10 and 20% female for most genres (roughly comparable to the data in the Arxiv nowadays, I think), with some notable exceptions. 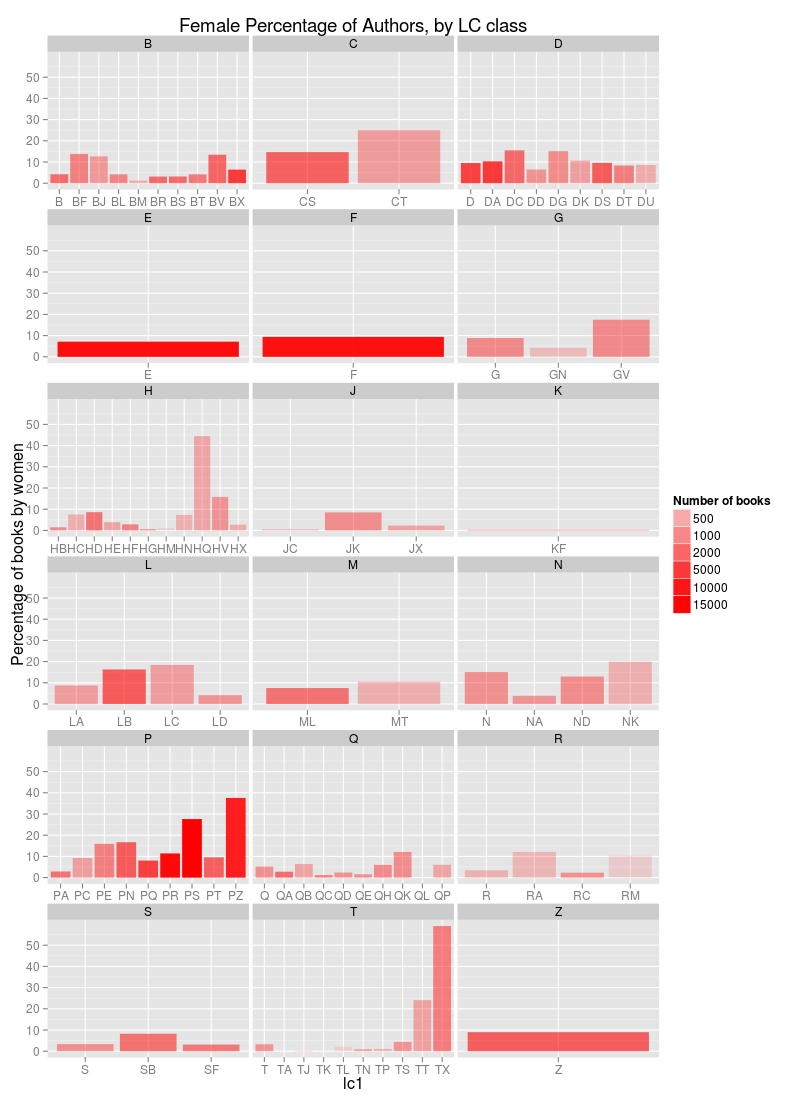 (If it’s not clear: the transparency here is according to the (log of the) number of books in the category. There’s will be a strong tendency on these charts to overestimate the importance of some small genres: this is my attempt to let you avoid that).

What about geography?
By state. Massachusetts does extremely well: of books with a publishing industry to speak of, only California does better. New York is OK, but in the middle of the pack. A lot of this probably has to do with the individual presses in the state–see the publishers list below for more on that. 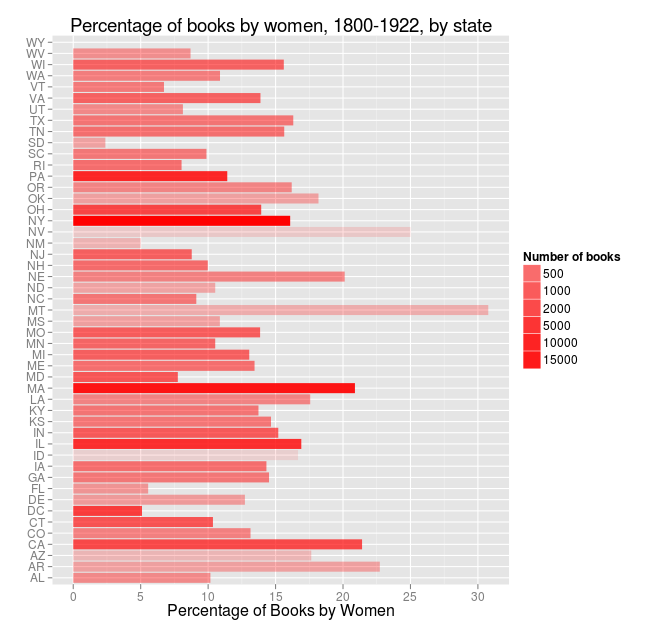 A question emerges: Montana and Nevada both seem to have high female percentages. We know that western states had women’s suffrage early; is the same true of female authors? A map loses the information about which states actually have significant numbers of books published in them, but makes regional comparisons easier. My opinion is that it puts to rest any idea of a particularly progressive West, but I could be dissuaded from that. 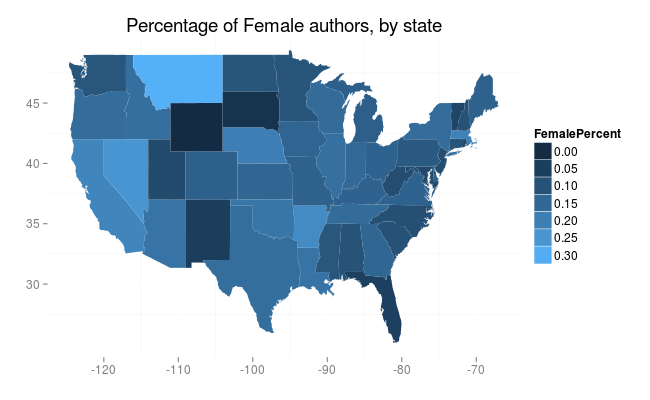 International comparisons are interesting as well. We can look at publication country. The result is a really striking win for the United States, with almost 18% of books written by women. The Swedes are next, followed by the Australians. Once again, the Germans are shockingly bad. This seems too strong to be merely a genre effect: the Germany overall percentage is lower than a lot of the science fields are. What’s different about 19th century Germany compared to these other countries? And what does America not have? I’m strongly inclined to blame the developed system of universities.

The numbers get surprisingly high here in some places:

Among the low percentages:

That’s the general outline of gender patterns from library book metadata in the data I have. One thing I’d like to do, but can’t with my current data, is look at whether individual libraries seem to have strongly discriminatory patterns compared to others.

If I were to draw a preliminary conclusion, it might be: established institutions–the state, the universities–seem to most strongly suppress women, presumably because there are more hurdles to jump. In certain areas, things have changed. In others, they haven’t–I ran some of this on the ArXiv author lists, and the 10-15% figures hold in the sciences. There’s no reason to think that the same massively distortionary effects aren’t still going on in academia, particularly on behalf or against social structures in addition to gender.

Keep in mind: women are the only discriminated-against group that we can pull out of library catalogs, but hardly the only ones in the 19th century. Surnames might get ethnicities–I haven’t had much luck with that–but race and class are virtually impenetrable. I suspect that access to print is at least as strongly skewed by income and race as it is by gender. I don’t think–I have to write this up at greater length–it makes any sense to not use libraries as they are not “representative.” They are what they are–libraries are interesting. Everything that anyone ever said would be interesting, too. We have one of these: we’ll never have the other.

A few disclaimers: All this data is restricted to 1,000,000 library books from the Open Library; I see no reason to think they aren’t basically representative of the books that make it into university libraries. (Except that all but one or two of them had considerably fewer books around 1910-1920). The basic gender categorization scheme is here. For “percentage of books” I calculate categorized female authors divided by categorized female plus categorized male, throwing out books I can’t classify. Those numbers will be off if unclassifiable authorship skews heavily in one direction or the other, but I don’t see substantial reasons to think that’s happening.

Awesome stuff, and I’m confident that this is …

Awesome stuff, and I’m confident that this is only the beginning of what we can get out of broad gender classification of metadata.

Two questions. 1) Why do you think people haven’t done this before? Didn’t require digitized text, just metadata – which we’ve had. My guess would be that error tolerances have been set too low. [“And although the data won’t be perfect, I can’t emphasize the degree to which this doesn’t matter for the sorts of questions that can usefully be asked of it.”]

I don’t think there’s any rush here: you should feel free to actually publish some results on paper before making that data public. But in the long run, there’s obviously a huge potential here for further work.

1) (With the caveat that maybe it has, in various …

For 2) Most of that should be in the file I linked, as long as it stays up. If I could pull together a real publishing agenda on this, I’d probably run with it. We’ll see. I don’t totally see a path to pull this from facts to arguments, but maybe that comes.

ID may be on the blink, but this is Ted. I think …

ID may be on the blink, but this is Ted.

I think the kind of information you’re seeing about presses is already pretty interesting. Not to mention the trajectory of the curve in your first illustration. I can’t believe that dip is real – but if it were real, that would require a pretty big argument.

I’m also very confident that the full-text comparisons you’re working up are going to be interesting. There are some really big questions that can be asked. I’m not even going to say more than that, because I figure you’re already working on it. Cheers!

I’ll say only I’m weirdly confident in that dip, although there are all sorts of reasons to suspect the data (particularly since so much of public-domain stuff is governmental. Pages 16-17 of this NSF report (pdf) give the gory details, but basically–pretty much every field experienced a 25-50% drop in the percentage of female doctorates from 1920 to 1960, in a manner only partly attributable (I believe) to the GI bill.

If ever munge in that Harvard Library metadata, it would be easy to check for sure.

LibraryThing has done some work on identifying aut…

LibraryThing has done some work on identifying author genders, as well, as part of their “Common Knowledge data - I don’t know how easy it is to extract, but apparently it’s been manually recorded for ~400,000 authors..

I have two iTunes libraries, one on my mother’…

I have two iTunes libraries, one on my mother’s computer (that I used to share with her) and a new one on my own computer. Both libraries contain a significant number of songs. Some purchased, some from CDs. I cannot locate all of the CDs from my original iTunes, and would prefer to transfer the music in one easy step. Is this possible?